State OF The Art Laser Show Controller Made In Germany

Ever since it was first publicly presented the laser has been seen as the jewel of light creation. Ever since no other light medium has fascinated viewers in the same way as laser light. Its special characteristics such as the immense intensity and brilliant colors are what puts everyone under a spell. Small wonder that the laser has been used for years as a medium for spectacular performances of all kinds, to draw attention and to impress audiences.

Laser is special in itself, however, it becomes an impressive medium especially when moving beams and pictures are projected in combination with music. In addition to a laser source, the most important requirement for this is a control computer - laser show controller - in order to integrate pictures, texts, beams and music into a laser show.

As one of the first companies world wide LaserAnimation offered a controller purpose-built for laser projections, the Lasergraph DSP. Since its introduction to the market more than 20 years ago this laser show controller has been developed continually. A lot of requests and suggestionsof professional users have been integrated and continually flow into the development.

Users all over the world value it as an extremely reliable show controller which on the one hand can make the laser dance in pictures and beams and which on the other hand can be used to integrate a whole range of other event- and stage technology devices into a performance.

For years the Lasergraph DSP stood and still stands for innovation, creativity, ease of use and reliability.

Highest reliability, which is absolutely essential especially for professional events, is guaranteed through use of carefully selected hardware components, the well proven real-time operating system and strict quality checks during production in connection with extensive test under realistic conditions.

The Lasergraph DSP Mark 2 is ready for use seconds after it is turned on, it does not require a long time to boot. This quick system start as well as stable operation are possible because the operating system is stored in the internal flash memory.

Live Operation without PC or Mac

Laser shows are programmed and edited on a Windows® PC or an Apple® Mac computer connected to the network and running the terminal software "LGRemote".A PC or Mac is not necessary for starting finished shows. For instance, when a control console is connected shows can very simply be started and played back using the live- and playback interface "jr. Live". Other media systems connected to the DSP via RS232 or ethernet can also be used to start a show.The laser show runs completely independently of the PC or Mac. Possible crashes of the computer systems have no effect at all on the live performance of the show.

This ability has always been seen as the most important feature of the Lasergraph DSP. The effect of any editing is immediately visible in laser on the screen or in the preview window of the programming interface - really WYSIWYG!

All calculations for scaling, deformation, shifting, rotation, for all animations, classic frame by frame animation as well as computer aided animations such as morphing, abstracts, color cycles ... are executed in real-time.For animations only key frames are created, intermediate pictures are automatically calculated during playback. The advantage of this concept of calculation is the small amount of data needed, the show files are considerably smaller over all. This is a definite advantage of the Lasergraph DSP, especially when playing back shows over a network.

The bright colors in a picture, in color movements such as color cycles or abstracts, the wonderfully smooth color transitions or the brilliantly colored beams as well as the excellent fade-out of each respective color are a trademark of the Lasergraph DSP and are obvious to any spectator.

The Lasergraph DSP has six color outputs which means that it supports laser with up to six different color lines. The laser colors can be adjusted to fit any established laser system. The colors for picture editing are defined through palettes for which countless (more than 281 trillion) colors are available. These palettes can always be adapted in real-time for soft transitions, dimming, cross-fades, color cycles and so on.

A separate digital signal processor (DSP) is used for the output which guarantees an outstanding picture quality of the scanned picture.The DSP allows scanning rates of up to 250kHz, even higher scanning rates are possible for color modulation in patterns.

The pictures sent from the DSP to the laser projector are automatically optimized. The system automatically inserts waiting times for blank changes so the picture achieves the desired geometry.

Since all pictures are vector graphics only the anchor points have to be entered when a picture is created. Points on straight lines can be omitted. If two anchor points are very far apart, intermediate points will be interpolated. If not all points are required, for instance if picture size is decreased, the number of points will automatically be reduced. This dynamic interpolation considerably reduces the flicker rate, avoids hotspots and makes the best possible use of the scanner speed.Interpolation, point reduction and blank delay can be set locally (for individual pictures) and globally. Globally in this case means the picture output can be ideally adjusted to the currently used laser projector.

Nowadays laser projections are no longer displayed as "pure" laser shows. Laser is increasingly integrated into complex multi-media shows as a striking effect. Combining the most varying media and effects into a meticulously planned show is one of the most challenging tasks a controller has to master.The faultless music-synchronized coordination of laser beams and graphics, light-, water- and pyro-effects as well as video projections can be professionally realized thanks to the versatile control options of the Lasergraph DSP.For instance a DMX console can be connected to the DMX input for controlling lighting systems or other stage- and event devices together with lasers. A MIDI keyboard can also be connected for simple live control of lasers and effects.

Several Lasergraph DSP Mark 2 can be connected with other computers (DSPs, PCs, Macs) in a network.Devices connected to one DSP (DMX, MIDI, SMPTE, fader board...) will then be available to other DSPs in the network. For instance the SMPTE timecode of a SMPTE timecode source connected to DSP1 can also be used by DSP 2, 3 or X in the network. This offers the huge advantage of greatly simplifying the cable connections, especially for big events with many controllers and peripheral devices.

Another important advantage is the fact that each Lasergraph DSP Mark 2 processes and stores all data locally. This makes it possible to connect almost any number of DSPs in a network and use them in a show without encountering delays when loading, editing or saving.

In addition to operation in a substantial network the DSP can also be connected to a modem for remote maintenance.

The following important protocols are supported for network operation: 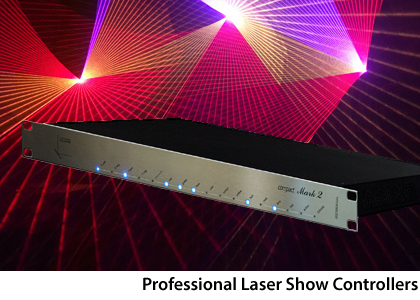 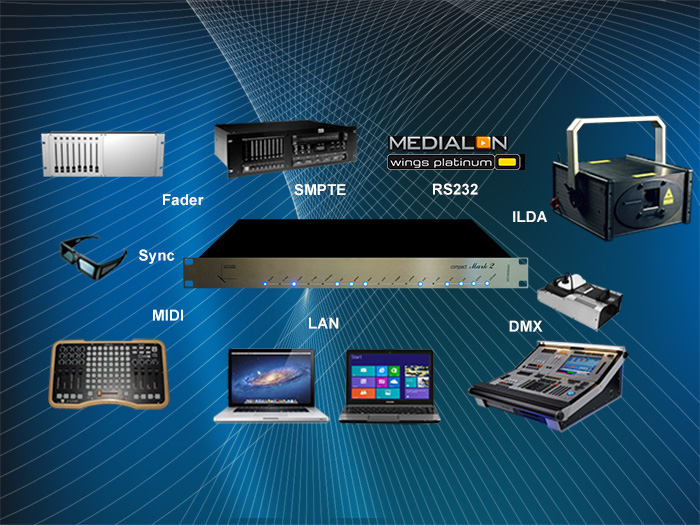